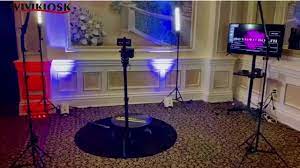 The cameras have developed big time since their inception. Once people used pinhole cameras which later shifted to ASLR ones and now people mostly use a DSLR camera for photography purposes. The cameras in mobile phones have also improved a lot and in most cases, they also play the same role as the DSLR ones. But even after all these, all the cameras come up with certain limitations. And the 360-camera booth becomes relevant in this case.

It helps in capturing images and videos of a person or many individuals from all angles giving a unique 360-degree look to it. Every 360-camera booth comes with a circular platform and people stand on it, using a slow-motion arm to circle automatically around them.

What is the result? An awesome video or photo content that has never been seen before, made just within a few seconds. It does not have any limitations and people do not have to worry about the normal problems that they have to face while handling the normal cameras while using a 360-camera booth.

It is the most useful and versatile form of booth available now in the market. It is mostly found in western countries such as the United States, United Kingdom, Germany, and France. Among the Asian countries, this booth can also be found in the markets of Singapore, South Korea, and Japan.

The 360X has a very useful feature that makes it compatible with many different types of photo capture technology. Whether someone is using an iPad or GoPro, this booth can handle the weight of these devices with ease.

360 camera booth is undoubtedly very easy and convenient to use. It does not require much learning for handling. Just by a single tap or click, one can start clicking photos and recording videos in this booth. One just has to ramp up the arm and everything is under his control, whether it is the adjustment of the timing or speed. The entire experience of video capturing in a 360-camera booth is fresh and smooth and there is almost no room for error.

Some of the modern 360 camera booths come with the bleeding edge design of the 360X that helps in capturing economical, compact, and quick videos that can grasp the attention of any person. As most of the people like to use iPads in photo booths nowadays, most 360 camera booths are compatible with them and the manufacturers have implemented them into their DSLR design flawlessly and effectively.

Handling this object is very simple and setting it is even simpler. It is a portable object which allows a person to carry them from one place to another. No matter what we want to create through the help of a 360-camera booth, it makes them quick and sometimes even faster than one makes a cup of a team for himself.